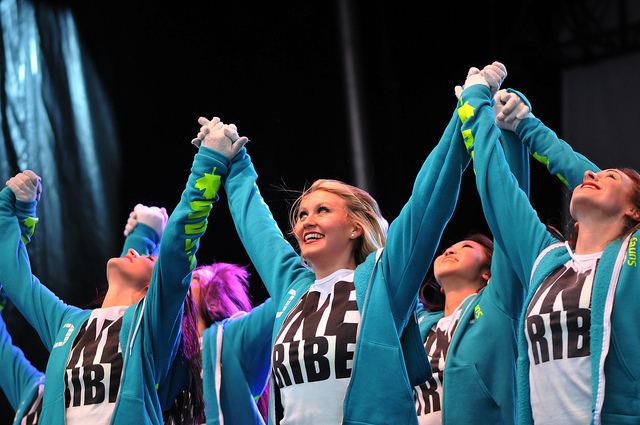 You’ve got the team assembled, put in the practice time, and dedicated yourself to competing. Now comes the hard part…  Choosing dance competition team names may seem an easy task at first, but once it comes time, “analysis paralysis” can take over. Don’t worry! Look at this as an opportunity to showcase the team’s talent as well as presenting the dance studio in the best light. Follow these steps, and you will have a team name you love:

While you might want to jump right in and create a cool or catchy name, it is helpful to take some time, do some research and come up with the best name for your team. Possibly the most important piece of research is to, whenever possible, find out the dance competition team names you will compete against. You don’t want to make the mistake of naming your team the same name or something very similar. Such a mistake will confuse people (especially the judges) when it comes competition time.

Pull the team together and brainstorm possible names. Consider creating a list of 20 names with the concept that no idea is a bad idea. Then, reduce the list considerably until you have at least three good choices. Keep in mind that once you pick a name and begin to use it, it will be very difficult to change it. Again, you don’t want to confuse the audience, opponents or others in the dance competition community. Thus, it’s important to pick a good name and stick with it.

Unique dance crew names reflect your studio, the team members, dance style and message you want to send to your opponents. Think about the following:

If focusing on team strengths, philosophy or overall identity, names might include adjectives such as:

Naming a team after a dance style should be carefully considered. As the team transitions over the years, styles may be reconsidered. Some dance team names include:

Picking a team name based on studio location may also seem a great way to go. However, if your studio expands to include other locations and/or moves to a different city, having such a name may become problematic. Some names to consider:

Using inspirational and motivational words can give the team a jump start during competition. If deciding to use such words as a team name, it’s a great way to get members involved. Have them write down the words that feel fit the personality of the team. Then create unique dance crew names that include them, such as:

Be creative during the process. Your team is unique. Once you’ve got your final dance competition team name choices, bounce ideas off of colleagues, friends and family members to get feedback and see if the name does reflect your team as you intend.

Ready to get started?